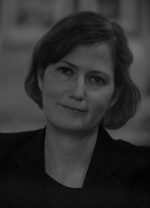 Kristina Shevory is a U.S. Army veteran and journalist with 20 years of experience writing for some of the country’s best publications, including the New York Times, Playboy, Wired, Businessweek, Atlantic Monthly, Newsweek, the New York Post and McSweeney’s The Believer magazine. For the New York Times alone, she has written more than 100 stores for nearly every section of the newspaper.

Her reporting has most recently taken her to Afghanistan and Pakistan for the New York Times, Playboy and Foreign Policy. After two years of badgering, Kristina convinced the notoriously press-averse Green Berets to grant her an embed to accompany them and their Afghan equivalents. Her story, “Afghanistan’s Last Chance: On the Front Lines with the Beleaguered Soldiers Fighting ISIS,” appeared in Playboy. The story remains the only piece of longform journalism emerging from a lengthy embed with special operations troops in Afghanistan in recent years. In Pakistan, she wrote for Foreign Policy magazine about the Taliban’s assassination of vaccination workers as payback for the Osama bin Laden raid.

Shevory was awarded the Alicia Patterson Foundation Fellowship, one of journalism’s most prestigious and lucrative, to support her reporting on US special operations soldiers and contractors.

Kristina has also covered soldiers as they transition to civilian life and was awarded for her efforts with the Overseas Press Club, Jon Davidoff, Medill National Security Journalism and the Military-Journalism Experience fellowships. For McSweeney’s The Believer magazine, she wrote an 8,000-word profile of a U.S. Army military intelligence officer who narrowly escaped death and suicide in multiple war zones to launch a highly successful writing workshop for military veterans and active duty soldiers. The Mesa Refuge in California and VCCA in Virginia, in tandem with the NEA, awarded her writing residencies to support her military reportage.

In a past life, Kristina was the managing editor of an English-language newspaper in St. Petersburg, Russia for two years where she guided coverage for a 20-person staff as the city’s native son, Vladimir Putin, rose to power. She covered state politics at the Associated Press in Texas, fine wine and business at the Seattle Times and dissected the booms and busts of the oil and gas industry for investment guru Jim Cramer of CNBC’s Mad Money.

She is a native Texan who served eight years in the U.S. Army as a Russian and Spanish linguist.